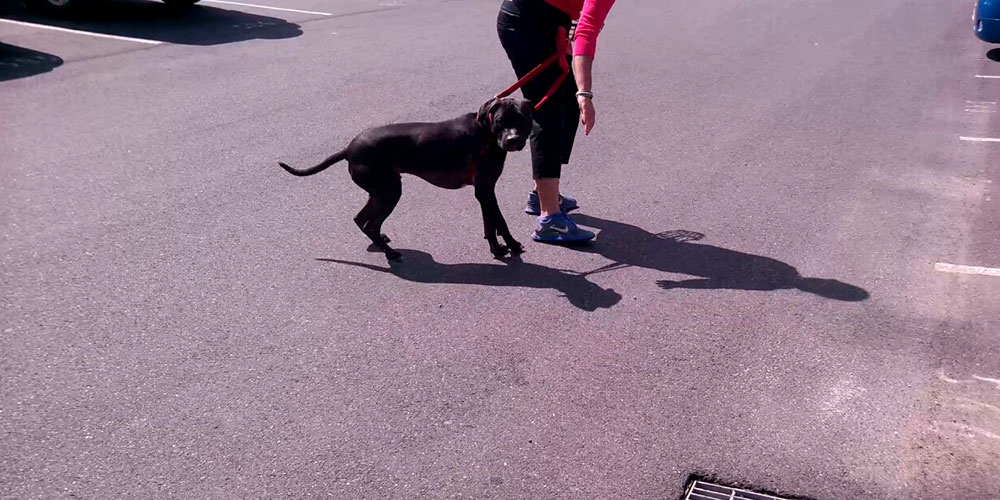 Hi, my name is Sarah and I became the accidental owner of a dog named G. G came to me feeling very nervous and insecure and displayed his nerves through aggression. Christmas 2013 was an incredible time of stress and worry with significant people in my life telling me to put him down. As a last resort I decided to get him assessed and made numerous phone calls until I came across a business called Good Pet Behaviour.

The assessment was pretty damning and spoke about an incredibly fragile 8 month old puppy who was struggling on a number of levels. I was confronted with a dog which needed to be medicated for anxiety, trained and ultimately a lot of time. My mother wrote me a letter about how she didn’t support any decision but to put G down but the assessment gave me a glimmer of hope and luckily I had time on my hands so I went for it. Chiara from Point Cook Dog Training was recommended to me as ‘the best Melbourne could offer’ but involved weekly drives to Point Cook for me who doesn’t have a car. The situation was such that it was all or nothing because G was pretty unwell after early experiences that were painful and confusing.

My daughter loaned me her car on a weekly basis and off we went to Point Cook. Chiara got us working on all sorts of stuff to undo G’s issues. She pushed us just enough, made sure we were all safe, taught me all about positive dog training and gave me a language that built my confidence in dealing with G. She answered text messages when things came up for me, her encouragement was enormous and she stayed in contact with the people at Good Pet Behaviour so we were all on the same page. She loved G which somehow helped me to express how I loved him and to feel proud of loving him. It’s a crazy story really; I’m not a dog person, I wasn’t looking to own a dog and having dependents is a lot as a single mum with two teenage kids who are slowly becoming independent and two cats as well but G opened my heart and marched straight on in there and as much as he struggled and still struggles, G wants to get it right so bad and works as hard as Chiara and I.

G has come so far and still has a way to go but we wouldn’t have come to this point if I hadn’t been able to find the expertise, love, support and dedication of Chiara. I love that she feels G and I are nearly ready to roll by ourselves but the down side of that is that we will miss her tremendously. For anyone looking at their dog and thinking ‘can we do this?’ book in with Point Cook Dog Training and turn things around. Raising a dog is a huge responsibility and can only be successful with the right informed and supportive training. I have heard a number of times that I can’t manage G because he is a breed that requires harsh and strong ownership but Chiara is an advocate for positive dog training techniques and they work, there is no need for bullying and punitive punishment.

The first time G met Chiara he growled at her and warned her to keep her distance and was too scared to go through the door to the training facility. In no time G would go through the door because it was the only way to get to Chiara and he was all tail wagging and love for her. G is so much more secure now and wants to play. He doesn’t like new situations and these will probably always worry him but I have skills to break down the situation to bring out the best in G. G has a walking group of friends on Facebook and can go down to the creek and love and be loved.

Chiara has been instrumental in our recovery and I hope we stay in touch long after G and I are good to go it alone.