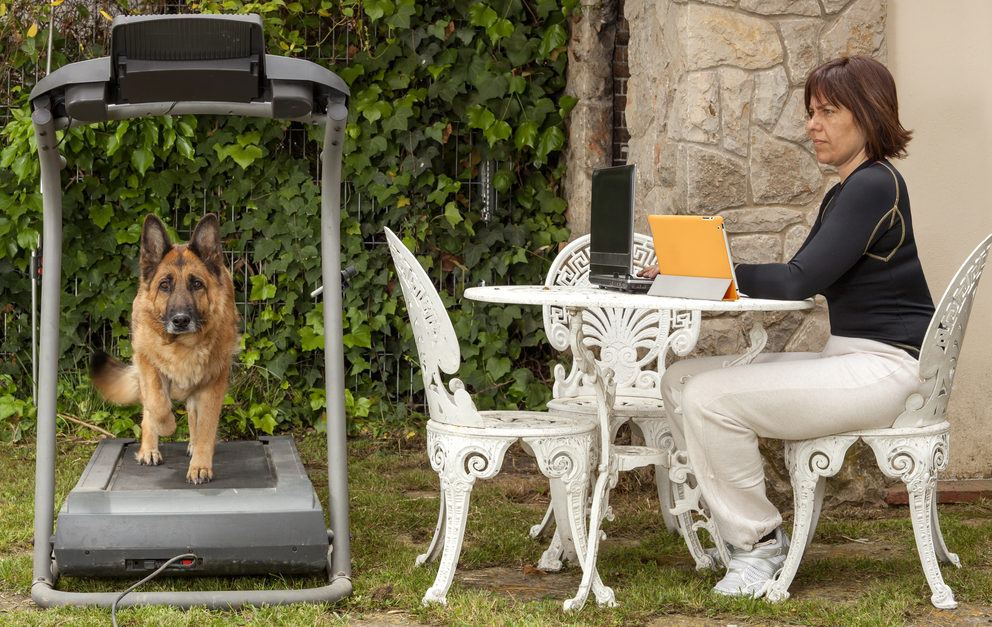 This year already we have had an explosion of new pups entering our programs and one question that seems to pop up often is, “How much exercise can the pup have”? This is actually a really good question and believe it or not, there is a limit. This limit has a lot to do with the pup’s breed, size, age and type of exercise you are considering.

When you bring your pup home, the first thing you want to do is take it out, start walking it and go places, after all, this is why you bought a dog right?

Then we have the super boisterous pups that clearly need to release their energy somewhere, so you then consider maybe jogging or even bike riding with it. But here is the catch, just like you would not let a 10 year old child go directly into AFL, the same goes for your pup.

You might be asking, surely if your pup has all this energy, it should be fine to go on a 5km run? What is too much exercise? Why should we stop our young dog if it wants to be on the go all the time? What kind of exercise can it do? How far can you go? How do we build strength, stamina and muscle without causing harm?

I will answer some of the questions below and explain why you need to wait and what the repercussions are if you start too early. Whilst the focus on this blog is predominantly about the physical effects over exercising can cause, I have added in a few other little tips on why we need to slow things down in general.

Pups all grow at a steady rate but what differs is how long this rate goes for and it depends on the breed. Whilst most small breeds like Jack Russell Terrier and Maltese complete their main growth by 7 months, the larger breeds such as Rottweilers, Mastiffs and Danes can take up to 24 months. The growth plates, which is where new bone stems from, is situated at the ends of the bones and the long bones take the longest to grow and these are the long back legs bones and front leg bones. These growth plates are on a mission to create a steady growth of even bone in all legs until they receive a message that growing needs to slow down and stop. If a young dog injures itself or strains itself and it happens to involve the growth plates, there is a high risk that growth will then be uneven so limbs may become misshapen or odd lengths and the surrounding tissue like muscles, ligaments and tendons become damaged along the way. Whenever a client reports to me that their young dog was in emergency because it was limping, the first thing I usually ask is if the growth plate was involved. It is always a relief when it isn’t.

Here is a brief summary of growth plate closure times, courtesy of an article Marianne Locke from Hands4Paws had in her files when she was studying Canine Myofunctional Therapy. I have written it in a simpler version so you can get an idea as to which bones we refer to)

Elbows- up to 7 months

Shoulders- up to 7 months

Femoral head (ball in hip joint) – up to 18 months

Fibula (the smallest of the lower leg bones connecting the knee/hock to the ankles) – up to 16.5 months

Tarsal bones (ankles) – up to 3 months

**As you can see, most bones don’t complete their growth until they are around 15 months of age which is why the Australian Kennel Club do not allow competitive sports such as agility, fly ball, herding and lure racing until the dog has reached that age.

Here is a brief summary of how much exercise and what kind of exercise is appropriate according to your  dog’s age.

Under 6 months – short walks or hikes, chasing objects dragged on the ground and gentle tugging, short swims, supervised play with other dogs matched appropriately, ladder work for body awareness, wobble boards, backing up, skills training such as sit, stand, drop, stay and some small jumps. **At no point should any of this exercise be forced. The pup is to work at its own pace.

Between 6-15 months – all of the above but in longer periods and owners can now add in longer walks and hikes, fetching, longer swimming times, weaving, running up and down hills, walking up and down stairs, doing some bigger jumps and side stepping. **Again at no point should any of the exercise be forced. The teenage dog is still to work at its own pace.

Over 15 months – all of the above with the intention to now build strength and stamina. Jogging can commence, bike riding, strenuous hiking, strenuous swimming, fetching the ball at long distances can start, bigger jumps, competitive sports training such as agility and fly ball can begin. The muscles and ligaments need to still strengthen so it needs to be a gradual build up.

Now here are a few other reasons we need to be careful with how much exercise our young dogs have.

Injury to the body is clearly one of the main reasons we need to be careful we don’t over exercise our young dogs, but we can also over work their minds. Pups and teens have boundless energy and sometimes they just don’t know when to stop. When they are at the point of no return, they then fall apart, just like the toddler being asked to leave the playground. Young dogs have poor impulse control so when they are overtired, they make poor decisions regarding their level of focus and their social skills. So we start to see play turn sour, we start to see redirected mouthing and biting, poor tolerance, over reactivity and just plain refusal to do anything. So remember when your dog is starting to look a little tired, end the play there so it has a little energy left to still think and go home. Try not to wait until the dog can no longer walk or is lashing out at all the dogs in the park because of exhaustion.

Here is a tip for those of you with the speedsters; the Border Collies, Kelpies, Cattledog and the likes. Despite these breeds being bred to last and love the drive, if we continue to exercise them hoping it will tire them out, guess what, it will eventually work the other way. These breeds are stamina heroes and the more you work them, the better they get and they are no different to the marathon runner training for the Olympics. A 10km might sound like a lot to some but to a working breed, running that distance eventually becomes a warm up and your dog will want to go a full 20km or more. After strenuous exercise, a release of endorphins occurs and this makes us feel good and helps us relax. Dogs get this too but once the exercise gets easier, it takes even more exercise to feel good and relax and this can become a dangerous path to head down as you may then end up with a dog that requires more and more exercise in order to get that happy hit. This is not healthy and also unrealistic. Try to teach your working breed that is isn’t all about the miles, down time is equally important.

Remember to smell the roses!

Here is another tip for those of you with active young dogs. If they are always running about, hooning down the street, at the park, at the beach and anywhere else, they actually miss out on all the good there is to take in. The world is full of exciting stuff, at floor level and there is something dogs are very good at that reveals this amazing world down low; we are talking about sniffing. Not only is it calming, it is very stimulating and it does not involve speed. In fact for a dog to really take in a scent, it needs to slow down, focus, follow and stay on task. Sniffing requires a decent amount of concentration and that can only occur when speed is taken out of the equation. So next time you go for a walk and your youngster is begging to run, run, run, slow down, start again and start teaching it to get down and sniff!

Some big No No’s

As mentioned above, growth plates, muscles, soft tissue and the general body develop over months and for some breeds, years and as mentioned above, sporting organisations such as Agility and Flyball clubs clearly state that there is a minimum age a dog can start attending these sports. This is because research shows what age would be suitable to start putting the body under more physical pressure. For all dog sports, the minimum age is 15 months old and whilst teens can chase balls, go over a few jumps and do crazy zoomies in the backyard, forced exercise is a no no.

Jogging 5-10km or cycling for an hour is forced exercise for a dog as it cannot stop when it needs to. It continues to run beside you until you stop. It gets caught in the moment once you start and really, it doesn’t get a chance to give you any signs that it wants to stop because you simply keep moving. We would never recommend you start jogging with your pup or teen or tack it to your bicycle and head out for the day as the constant pounding of the joints will end up causing stress fractures to the growing bones, fatigued muscles and strained ligaments and tendons. These young dogs need time to build up their physical support system, so let them run and clamber themselves, let them explore uneven environments at their pace but avoid forcing them to move continuously for a long period at one pace.

Twisting and turning is to be minimised to reduce injury to the spine, knees and cruciate ligaments. These body parts are still developing and strengthening and forcing your dog to weave at speed, chase balls into the ground, jump in the air to catch balls or frisbees and running and turning at fast speed can cause tears and ruptures.

Jumping off elevated objects such as couches, beds and even high cars can cause injury. The jumping off can apply a lot of pressure to the back of the neck, shoulders and even hips so encourage your dog to step down slowly or install a ramp or step to reduce the height or better still, lift it in and out but remember to bend your knees!

Slipper surfaces such as tiles and floorboard are great when it comes to cleaning and allergies but for young dogs, they can create a problem. It is fine if they have the sense to walk around calmly but if they are careening around, doing zoomies in the kitchen, then there is a higher risk that they will lose traction and slip on a turn, either colliding with furniture or twisting their hind legs. Encourage your dog to walk calmly through the house, especially when you have slippers surfaces inside.

So for all of you out there with the youngsters, please take note of those growing periods, slow your dogs down, ease up on the forced exercise and just give them time to complete their growth in a safer manner.