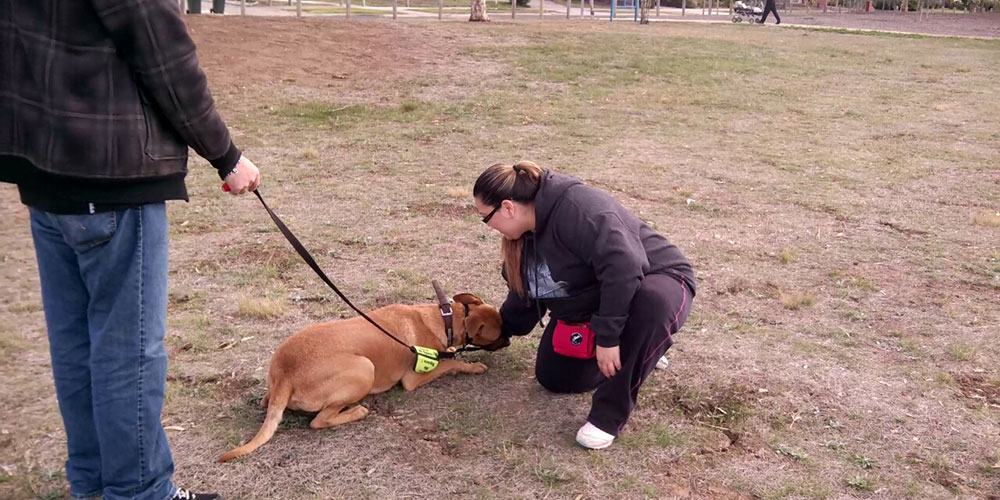 Mum and Dad: Norma and Brendan

He was rescued and then adopted by his current owners Norma and Brendan after they found out his previous owners had not looked after him. He was not fed properly, he was locked up in a garage, sometimes not seeing daylight for a few days, he had no socialization at all and was deprived of all the normal every day opportunities that other dogs get.

As a result of this, when he settled in at home, they soon noticed he had some serious behavioural problems. He was terrified of their visitors, barking aggressively and hiding each time he saw them, he would bark and lunge on the end of his leash each time he saw a person or another dog on the street, he would cower and panic and he would not focus on them. They could not control him or manage him and each time he reacted, they would get dragged and thrown around.

Yet after months of watching him behave like this, they saw something in him, his soft eyes, his playfulness when he let his guard down and realized he did not want to be like this, he did not like being paranoid on his walks, he just had no idea what it all meant or how he WAS supposed to behave.

So after a long consultation and work up at Good Pet Behaviour and under the watchful eye of Dr. Gabrielle Carter, Monty began a new regime of anti-anxiety medication, very clear guidelines and rules were set to make his life more predictable and then training began with me to help break down all those fears.

Monty was referred to me for ongoing training and behaviour modification.

So this is Monty’s story. Today I met a dog, a large dog that was terrified of the world. He could not trust his new owners yet, he was trembling so much he could not stand up straight and any slight movement around him made him collapse.

His head pivoted side to side every second, he expected monsters to come out from everywhere, he was paranoid of everything, he was breathing like he ran a marathon, his body was so tense you could bounce a ball off him and he could not control his bowels- out of fear.

Despite being medicated for his anxiety for quite a few months, he was still so debilitated by it that he still found it really difficult to function in public.

It was distressing to see this. Here were these two beautiful owners, desperate to make him feel better and see life was okay with them, yet he could not see it. So the session was ended soon after and a review of his medications was in order through his veterinary behaviourist. He needed more stuff on board to calm his fears and allow learning to occur. It’s been two weeks since I started working with Monty. Medication is now stable, he is making some big breakthroughs at home with visitors and family and he has finally accepted his head halter when he walks.

Despite this, there is still no focus on the owners, he is still quite nervous on walks with his tail tucked firmly underneath his belly, he refuses to sit because he is still scared and refuses to take treats and any sight of another dog or person sends him into a barking and lunging episode.

So what we started to work on were three key areas, Desensitization, Counter Conditioning and Focus!

We started a desensitization process to gradually teach him that dogs or people nearby were not scary but we started with a large threshold. We kept people and dogs about 50 metres from him.

We added in counter conditioning which meant we were changing the association towards people and dogs from being scary to being positive.

And we started to teach Monty that if he focused on his owners, his fears and anxiety would reduce, he could look away from his fear and that he could trust his owners.

This was to occur on every single walk and Norma and Brendan were instructed that no matter what, no matter how out of control Monty’s behaviour was on his walks, that they needed to remain calm, continue to be clear and guide him along and reward him for anything remotely good. Over time this would pay off!

Monty continues to improve at home with more and more tolerance of visitors occurring each time. He now brings people his toy rather than barks and escapes upstairs- this is a massive turn around.

Walking has improved enormously when passing people. He no longer looks at passing people with suspicion and no longer barks or lunges at them. He now walks past without a sound but you can still see he is not totally comfortable about it.

Norma and Brendan have learned how to move him over and give him more space and their counter conditioning is starting to pay off. He still struggles to look at them when on walks but he is willingly taking treats now and he feels he can trust them a little more!

All we are doing now is working on timing, gradual exposure to various people and situations and still moving on with desensitization and counter conditioning. At no point has punishment come into this.

Today I met Monty at his place for the first time and it was good to see how he was in his home environment.

He met me at the door barking, retreating, then barking at me again and he was really nervous. Then he realized who I was and with no pressure added, I allowed him to come to me to sniff me and feel me. He cautiously took treats from me which was fine as he needed to take his time with this.

We then moved onto our walk and I could see he was still struggling here. He was fine working at the training venue but he had still not transferred those valuable skills at home.

And once again I began coaching them on when to ask for focus, when to reward, when to counter condition, when to move because people were coming and it was as if a light bulb moment occurred in Monty’s head. He must have thought, “Oh, I am meant to do the same skills here as I do with the trainer at the centre”. So off he went, getting better and better and slowly relaxing more as he found a new confidence in himself.

What also happened was that Norma and Brendan felt confident too because I was guiding them along as we walked, helping them feel like they were getting a grip of it all. They were getting just as much positive reinforcement from me as the dog. Today was unbelievable! I met Monty at his place for the second time as we were ready to continue the generalization process, putting all the skills he learned at the training venue, into his own home environment.

The first thing I noticed, no more barking but instead a stuffed toy in his mouth coming charging at me. Instead of lunging, I then had a Monty dog thrust the toy into my hands to play. This was beautiful.

So we went for a walk in their streets again and I could already see something was different. He was starting to raise his head to look at Norma and Brendan; something he had never done before, his tail was out now when he moved and no longer tucked underneath him, he was sitting when asked to and he was totally disinterested in people.

We continued on the streets and we passed lots of people, bikes, prams, traffic, children, school kids, postmen and more and he just cruised on by without a care.

Then he did something remarkable. When we were at their local oval, a group of people passed and then a person with a pram and normally he would have been fixated on them, not barking necessarily but not relaxed enough to turn away from them. Well today he did. When he was asked to focus on Norma and then to lie down, he did exactly that! It brought tears to my eyes.

I started doing some sessions at Mutts with dogs from day care and slowly desensitized him to them so within a few months, he was not fussed about dogs either but we had to work on that generalization process all over again at home.

So in May we started home lessons, using Ronelle and her dog Bai as my props. Initially Monty reacted as he had never seen her before nor had he been near another dog long enough so with a threshold of 50 metres, we started working closer and closer over the hour.

Within 30 minutes, he was settled and we were now about 20 metres apart. Everything was done at Monty pace.
These sessions continued like this over the next 6 weeks as Monty got more and more used to having a dog walk beside him and with each lesson, he got better and better.

Today I took my own dog to Monty’s house for the very first time so we could go walking together. My own dog is special needs and also is reactive to other dogs due to bad experience, but he trusts me enough to know I would not let any harm come to him. This was going to be interesting.

We started off walking, with me being ahead and across the road, so that both dogs had their space and time to settle down.

Over 10 minutes, we were on the same side of the road with me on the nature strip and Monty on the footpath. Both dogs were calm, both dogs responded to cues, both dogs focused and took treats.

Over another 10 minutes, the boys were walking side by side and going about their own business.

We got to a park to do more work and Monty kept blowing me away with how far he had come. Even when my own dog had a small bark, Monty just kept working!

Over the months leading up to the end of the year, Monty was finally ready to go it alone. Norma and Brendan can walk him past people, can take him for a walk down the street without him lunging or barking or dragging them, can pass dogs a lot easier than before and are now also taking him to the fenced dog park for some play with some of his friends.

He is a happier boy, much happier than when I first met him and he is the love of their lives. He would never have gotten to this place if his new parents had not rescued him and given him the chance.

Yes he was and still is under the care of behaviour specialists and trainers but at the end of the day, it takes dedication and commitment to get Monty here.

And so this is why I love my job!

If your dog sounds like Monty, please seek professional help before starting behaviour modification training with it. Dogs suffering from anxiety, aggression or abnormal behaviour should be assessed by a Veterinary Behaviourist first and then managed by a Behavioural Trainer. Every dog is different and each case is worked up specifically tailoring the plan to suit that dog and family.

If you require a referral to a Veterinary Behaviourist, please go to www.gooddogbehaviour.com.au