Off leash etiquette – Friendly or Rude? 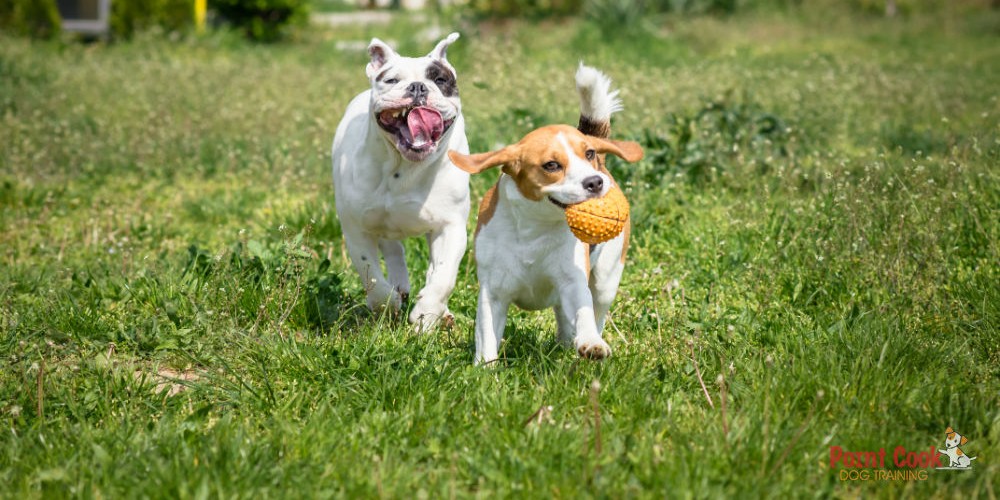 Spring is in the air and we all know what that means? It means daylight hours are increasing, blossoms are budding, weather is warming up, hibernation is coming to an end and we are now ready to hit the parks with our dogs again.

Many of you already know my thoughts and views on dog parks and while the concept is great, unfortunately what goes on between fences is not so great.

You have heard me mention before that we have unleashed the ‘lazy dog owner’, where some, not all, dog owners use the fenced dog park as a way to let loose their uncontrollable dog. Instead of using this set up as a place where you can safely let your dog run around and play, some dog owners are choosing to release their dog, then ignore their dog and dismiss the havoc it creates and disappointingly, dog fights are breaking out. On a more disturbing note, some owners are even going to the extent of sitting in their cars while their dogs are in the park, or even going home!

So note to all owners, if you cannot leave children unattended in a playground, the same goes for your dog!

Anyhow, this article is not about lazy dog owners but instead about what appropriate play should look like. Quite often in classes, I get asked “what is ‘good’ play?” or “how do you know when it is getting out of control?” While most owners actually get it and know when it is getting rough, they sometimes feel conflicted because the other owners in the park throw phrases out such as, “leave them alone, they will work it out”, or “my dog is friendly but sometimes likes to dominate”!

So let’s have a look at how this can go wrong and let’s have a look at from another angle. For parents out there, if your child was being pushed to the ground and held down by another child, would you leave it there to work it out or would you intervene and end it? It isn’t about who or what is doing it but instead about the actual behaviour that is occurring so for dogs it really is no different.

I have once again set up some common scenarios and while the dog names have been made up, the situations I have described are real. Read on and see if you have been in this position before.

Imagine we have a new young dog (Maxi) who has just finished puppy classes, had a wonderful time and positive experience and thinks dog are pretty cool and fun to be around. So for the first time he goes to a dog park with the ‘bigger’ dogs to add to his buddy list. They enter and the owner lets it off and things look great. He runs up to a few other dogs, play bows, has a sniff and follows them and then moves away to explore. Suddenly a larger, bold dog (Rex) comes rushing up and hovers over Maxi and refuses to let it up. The owner of Rex believes it is teaching Maxi who is the boss and allows this behaviour to continue and even goes to the extent of telling Maxi’s owner that they are too soft and need to leave the dogs to it. Now Maxi starts to panic, lip licks, cries a little, lowers himself to the ground and Rex just takes advantage of the situation and now pins him. Rex’s owner still believes this is fine so now we have an exchange of words from one panicked owner to a very blasé owner. So now Maxi starts to growl and nip and before we know it, Rex goes in for the grab and all hell breaks loose!

So what has Maxi learned here? That big dogs are scary, big dogs bite and intimidate and you cannot escape the situation unless you use aggression and potentially have started the chain of events that leads to dog aggression. As for the owner, they are now anxious over big dogs, don’t trust other owners, don’t trust dog parks and are now reluctant to let their dog off leash again.

Imagine we have Maxi going off to the dog park for the first time. The owners are nervous because there are other dogs in there. Before they walk in, the other dog owners call theirs away from the gate and ask them to sit and wait. Maxi pops in and is let off the leash. The other dogs now come over to check him out and then the owners call them away again, giving Maxi time to check them out and explore his surroundings. One of the other dogs (Sally) comes over to check Maxi out again and starts to push him a little and Maxi freezes. Sally’s owner immediately notices that Maxi is nervous and calls her away and when she does not respond, she gently collar grabs her and moves her over. She acknowledges that Sally can get a bit rough with new dogs but will stop her when she sees the other dog doesn’t like it. So instead they now all walk together as a group so the dogs keep moving while they get to know each other.

So what has Maxi learned here? That other dogs can be friendly and sometimes they can be rough but they are not going to be threatening and soon after, everything settles down and the dogs can meet up while they walk. The owner learns that the park can be good, there are responsible owners in there who understand their dogs and recognises what is acceptable behaviour.

Maxi is going to the dog park for the first time today. There are a few other dogs in there so the owner is nervous. The dogs come rushing up to the gate and Maxi barks at them and growls. STOP. So we have two possible outcomes here and it all depends on the owner now.

As you can see, it isn’t always up to the others to keep it all under control. Every dog owner needs to be responsible for their own dog and they must be the voice and the advocate for their dog.

Each time your dog goes to a dog park, it is having a ‘real time’ learning experience about dog interactions, people interactions, the environment outside of its home and more. If it has a great time, it continues to enjoy itself and looks forward to these experiences again and again. If it has a negative experience, it then begins to develop anxiety over these situations and before you know it, we have behavioural problems in our hands.

Here is a video of what I call ‘appropriate’ dog play. Note how it appears soft, dogs seem happy, they are taking turns at leading, turns at who is on top and who is under, there is no intense noise, it is quiet and they are smiling.

I thought hard about whether I should place a video of inappropriate play and decided against it as there are people who enjoy watching dogs fight so rather than show you what it shouldn’t look like, I thought I would focus on what is SHOULD look like. It play appears rigid, the energy is high, it is one sided, the dogs do not appear to be soft and happy, then it is inappropriate.

To me it is pretty obvious what is good play and what is bad play because I have been around dogs for many years, observing interactions both in and out of their homes, consulting in households where there is conflict between the dogs, watching play time at Mutts during the week and I can both see and hear when things are about to turn or are building up in tension. It makes me smile when I see dogs at Mutts, rolling around on the floor with their tongues hanging out, spooning next to their dog buddy or shoving a toy in the other dogs mouth as it plays a game of tag. Yet it makes me sad when an owner tells me of their horrible experience in the dog park where their dog was bullied, pinned or even bitten or even yelled at for being soft, because both dog and owner now have to live with that memory and quite possibly, forever.

To the novice dog owner it can be quite daunting and you do have a sense to protect your new dog and to the owner who may have had a past bad experience with dog fighting, it can even be traumatic as memories flood back in.

To the more experienced owners, lead by example, teach the novices what is good and bad play, support them if they feel unsure and give them the time and space they need to feel comfortable with it and if their dog is just not into it, let them know it is okay and that maybe just a walk is better; I mentioned this in a previous article called Social Anxiety- not all dogs can handle a social environment.

I shall wrap it up now and I do hope that over the next few months, leading up to and during the holiday period, people are more mindful of each other and their dogs and that we do not have any incidences in the parks. Please share this with all your dog friends, especially the new ones who are still learning about all of this dog stuff and let’s make sure we keep our dogs happy and safe!!

Thank you to Chobe and Maasai for starring in the video.