Dog Poop – the other end of your canine friend! 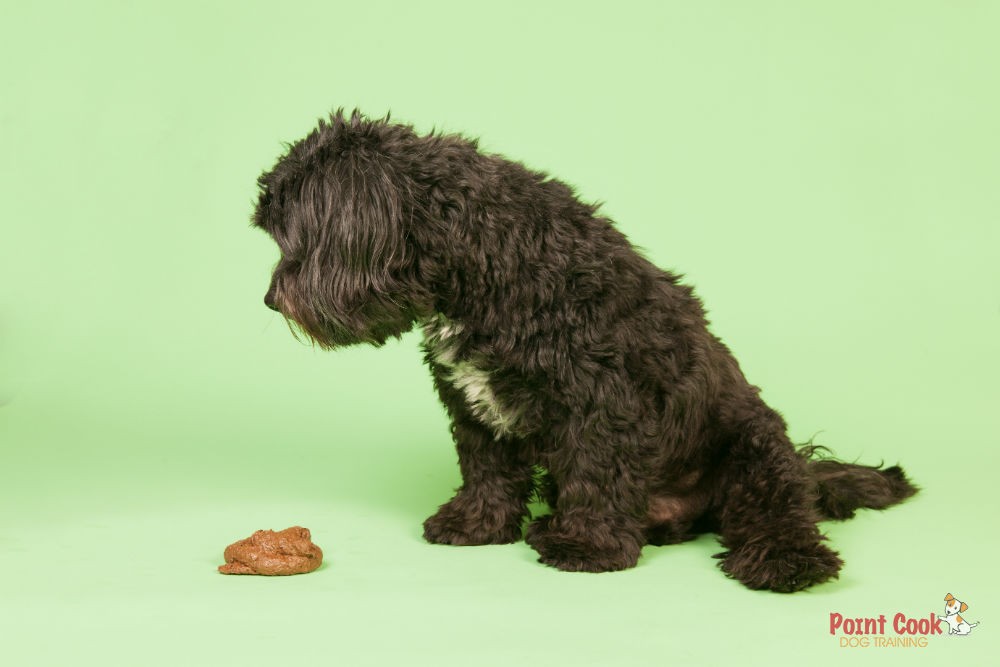 Dog poop- we all know what it looks like, smells like and maybe even feels like and while some of us are okay with it, others find it very difficult to even be around. So why am I writing an article on dog poop? Because no matter what your thoughts are about it, when your dog is out in public, you just gotta pick it up!

Read on and soon you will see dog poop from another angle and why it is so important to collect it from the park, the nature strip, the footpath and wherever else your dog might choose to dump it.

The law states that ‘if a dog eliminates in a public place, the faeces must be collected and disposed of responsibly’ and you may be fined if caught by a council ranger for not picking up after your dog.

Councils do place bins in many locations and parks are often well signed and many even go to the extent of providing poop bags. Yet time and time again, when I go walking, whether it is with my dog, my family, with a client or on my own, not a trip goes by without me seeing poops and not one but many.

Just the other weekend I was at the You Yangs with my daughter, going for a hike on a lovely sunny day. We just finished trekking for almost 2 hours and were back at the car park having a drink. Along came a young man with his girlfriend and their cute little Dachshund, that was until it decided to do a poop right next to the main information board. Now it’s not the dog’s fault it had to go to the toilet; it might have had a long car trip but what was extremely disappointing was that the owner watched it, looked around, waited and then just walked off! He knew it pooped, he saw it pooped and very likely smelled it, yet he pretended it never happened and left it there. So imagine what all the other hikers would think given that it was only lunch time. There were four more hours worth of people who were going to pass by that sign and this is what I believe most would have said; “Dirty dog owners, that is disgusting, they should ban them from here!” I am pretty sure no one commented on how cute the little poop was right there next to that sign. And I have to agree, yet it is sad that the minority of irresponsible dog owners can have such a negative impact on the general public.

Oh and I must share my recollections of a trip I made to Italy back in 2010 where I literally had to dodge the dog poops when I walked through the main city streets. It was fast becoming a joke as I was taking more photos of dog poop of all shapes, colours and sizes and even dogs pooping than the sites around me. I wasn’t always lucky in evading them either; sometimes I just didn’t see it clear enough and bang, sure enough, it was under my shoes.

What was interesting was that when I returned in 2014, there was a dramatic improvement and the Italian government felt it was a priority because it was embarrassing as tourists kept commenting on how ‘poopy’ the country was, so that photo album fell very short of the poop pictures on that trip! Gone were the scattered dog poops and instead people carried bags and people were collecting them; a massive change over four years.

So aside from the fact that it is pretty gross to see dog poop everywhere, let’s have a deeper look at some of the health risks and limitations people face if these poops are not collected.

1. Did you know that puppies and young dogs often carry roundworms in their intestines and their eggs are often excreted in their poops? This is why it is so important to worm them when they are young. As adults they tend to be more resistant however we still need to keep on top of it with regular worming. You might ask why the concern?

Well, every year a small number of children, even in Australia, are seen by doctors because they have suddenly gone blind. The reason the child goes blind is because during a larval stage of the worm, it goes and sits behind the eye which is one of its preferred environments and quite often the child picks up the parasites by eating dirt or grass or licking toys that have been in the garden which may have come into contact with dog poop. While it is not a common problem, it does occur and can be avoided.

This would not be such an issue in a normal backyard where poops are collected frequently and the dog is wormed however if the child went to a park which is soiled by degenerating infected poops, crawled around on its hands and then licked the hands, it has a much higher risk of ingesting the little buggers.

2. Did you know that up in the warmer regions of Australia, another parasite called the Hookworm lives in dog poops and when excreted, one of the larval stages sits there or sinks into the ground and when it feels vibrations such as footsteps, it emerges and migrates into the soles of the feet and then slowly works its way into the body- I can literally hear other fellow Victorians breath a sigh of relief right now, glad that we don’t have constant warm weather!

So again, if dog poops are scattered all over the park, even after they have broken down, the parasites that came out with them still linger in the soil and the environment, waiting for their next host which quite easily can be a human. Up north hookworm infestations as common because people tend to walk around bare foot. Grossed out yet?

3. Here is another fact. Councils are getting more and more fed up with poops being left in the streets and parks because it is fast becoming one of the most common complaints made by the general public and it is starting to trump the roaming or barking dog complaints. As a result of this, they are starting to place more restrictions on dog owners as to where they can walk their dogs. Some shared parks and ovals have come under dispute because the public have complained so much about the numerous poops they have to dodge that they eventually banned dog owners from these areas. Dog parks which are purpose built for dog owners are becoming a mine field of poops and it is turning dog owners off even stepping in there. I still have vivid memories of a recall lesson I did with a client some time ago down at the fenced dog park at President’s Park in Werribee and it was embarrassing. There were more poops than grass and you could not take one step forward without landing in one! And there is nothing worse than having your dog chase a ball, smear it through a fresh one and then bring it back to on its feet and mouth. Ugh!

4. And did you know that if you regularly collect your poops from the garden, your dog is more likely going to be cleaner and more discrete as to where it toilets? This is because dogs do not like eliminating too close to their last one for fear they might step in it but if you only collect them once a fortnight, then your dog has no choice but to keep moving around the others, hence why your garden ends up looking like a mine field of poops. Clean them up every few days and you will find your dog will stick to particular spots and leave the rest of the garden untouched.

5. For dog owners with dogs that love eating their poop, cleaning them up as quick as you can will reduce the chances of coprophagia (technical term for poop eating). There are many causes for this yucky habit from simply the taste of it to the more complex anxiety, general boredom to even an ingrained appeal

How do we combat this dilemma?

It is quite simple! We just need to train ourselves to bring dog poop bags with us whenever we go out with our dog. When you check if you have your house keys and leash, you just have to remember to check you have enough poop bags as well. They are quite cheap and you can buy rolls of them that fit nicely in your treat pouch or even on the end of your leash and quite often you will find them in the dog parks too.

If you see a dog poop in a park and the owner seems ‘unaware’ of it, politely bring them a bag and point it out to them so they are put on the spot and cannot avoid the issue.

Take pride in your dog park and the streets you walk in. I am sure everyone prefers to walk down a clean street and through a clean dog park than a poopy one!

Yes it is but if you use the bags correctly, it is virtually impossible to get any on your hands. So to teach you how to collect a dog poop, here is an example of how it is done.

Place hand inside the bag so you don’t come into contact with the poop!

Place bag over the poop.

Pick up the entire poop with the outside of your bag.

Invert the bag now so that the poop is inside the bag and your hand is on the outside.

Knot the bag and bin it. If it is extra stinky or you don’t have a bin nearby, double bag it to reduce the smell.

What about the runny ones?

Well I think the only exception to this whole article is if you get a super runny one as they are virtually impossible to collect and fair enough. If you are close enough to water or can get a jug or bucket of water, rinsing it down is best but as far as picking it up goes, well it’s as hard as picking up slime!

So there you go, a little bit of information of a pretty stinky subject but just as important, especially if we are going to share parks, footpaths and public spaces!