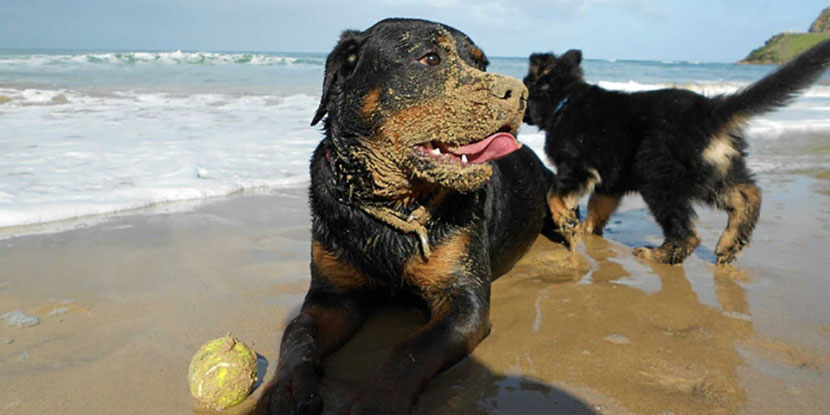 Signs: growling at people passing, lunging on the end of the leash at people, trying to snap at people she was unfamiliar with, lunging and growling at dogs passing

River was owned by Shane since she was a pup and was normal in every way. She socialised, she went to dog day care, she saw lots of people, had great experiences and was quite well mannered.

As she approached adolescence and hit one of her last fear periods, she began to struggle in areas she was good at. She became unsure around people in the street, she started to growl at them and also had a snap and this lowered Shane’s confidence in how to manage her.

River was always sociable around other dogs but since her behaviour around people had escalated, Shane was no longer letting River off leash so her manners went backwards. Within a few months, she was frustrated and now growling at dogs too.

So after a brief discussion with the Veterinary Behaviourist Dr Gabrielle Carter at Good Pet Behaviour, it was decided to try some training and behaviour modification first to see if that was enough to get her back on track while she finished off her fear period.

It is normal for some dogs to lose themselves as the go through this phase but what we do know is that early intervention is the best remedy. Using correct training methods and being patient is important.

This is River’s story. When I first met River, I saw this gorgeous chunky Rottweiler who leapt out of her car as soon as she arrived at the training centre.

I walked over carefully and already I could see Shane was very guarded and cautious, worried she would lunge at me or try to bite me.

Instead of walking head on into her, I put out my hand with food in it and let her lick it off and I avoided eye contact to reduce the pressure.

I could see in her eyes, she was soft, she was scared and she really wanted to say hello but she was conflicted as to what to do.

We began our session with Desensitisation and Counter Conditioning, focus and basic manners.

We used Desensitisation to slowly teach her she could be around people again and in public places so we began with a threshold of about 15 metres- this is where she felt safe.

We used Counter Conditioning to slowly make her feel positive about being around strange people.

We spent the first few weeks at the training venue where there were fewer people around and we began working on Focus until she willingly looked away from people passing. Her body language softened, she took treats immediately from Shane, she began to find walking past people a lot less stressful and her leash became a lot more supple. It looked like River was going to get through this. What needed convincing was her dad as he was rattled by her previous behaviour.

A few months into training and River was ready to do her first public walk so we met up at the esplanade in Williamstown and started our lesson. I spent most of that time coaching Shane who would often hold his breath and panic but once he realised he had space and time and he could move River around people if he needed to, he saw she could do this.

Over the hour, we passed people outside cafes, kids on skateboards, ladies with trolley, people walking, people coming out of shops, out of cars, out of restaurants and not once did she react. She had moments where she was unsure but as soon as Shane presented treats and asked her to LOOK, she did just that!

What an awesome day, seeing her walk in public with her smile once again. From this point on, her issue with people reduced dramatically and was getting better each week. Now we had to tackle the dog issues and get her back to playing like she used to.

Over a few months, back at the training venue, we worked River with other dogs from dog day care, gradually desensitising her to them and reducing her frustration levels.

Ronelle met us a few times with her dog Bai and we gradually got River back on track where she could now come away on a loose leash when near another dog, she could follow cues and respond to them and she could walk side by side without reacting or growling.

We brought both dogs into the venue and worked them off leash with a barrier between them and this was when we saw the cheeky side of River, play bowing and trying to initiate play.

Once we saw River and Bai were comfortable around each other, we knew it was time to test this out and let them both off leash in a dog park.

So we met at a fenced dog park in Spotswood and took the next step.

Both dogs had pretty good recall and both dogs were sociable.

We let the dogs off after I reminded Shane to breath and off they went, charging at each other from 100 metres away. They met up, they sniffed, they circled, they ran and chased each other and as soon as River was called away, she came!

She chased her ball and was more interested in that then playing with Bai and finally Shane could see his old River coming back.

After ongoing training to ensure River is kept on track with her improvement and Shane felt confident enough to get her out and about, River is now finally at a point where she could get down to the beach, meet a few other dogs, play off leash at the dog park and walk quite happily down a busy street. Life for these two has changed and instead of closing River off to the world and avoiding everything, Shane took it on board to do the training, take the time required and slowly but surely work through the problem and resolve it. And not once has yelling, correcting, yanking, pinching or any other form of aversive training come into it; only treats, praise and lots of feedback and patience!

Well 2014 proved to be quite a good year for River. Over the year we continued to catch up regularly for walks with a bit of training thrown in, down at the beach in Altona or up at the You Yangs for a hike and each time she had a wonderful time. Gone is the fear over people and busy areas, gone is the frustration with dogs. She has lots of weekends now down the beach playing with her dog buddies and she now loves life!

She has a wonderful dad who understands her and supports her and gave her the time and effort she needed to get through such a difficult period and it just shows you that you can get there!